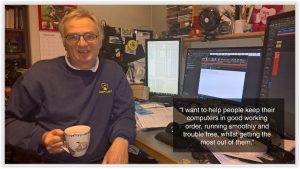 I have been working professionally in the IT industry since 1983, as a Computer Programmer, Analyst, Project Manager, Pre and Post-Sales Consultant, Software Designer, Trainer and Development Team Manager. In short, I have been a heavy user of computers, for a variety of purposes for a long time.

In 1986 I got my first PC at home, a right scabby thing it was too, but it totally captured my imagination. An amazingly powerful 8086 processor, 128K of RAM, and not one but two 5” floppy drives, and a fantastic colour screen – well it was green! Before long I had expanded it well beyond the bounds of its case and had to build it into a tallboy. I upped it to the full 640K RAM and added four massive 10 megabyte full height drives, which had to sit in the drawers with switches to connect any 2 from 4. It was so cool! Probably the first 4 foot high, wooden-cased, PC in the world. I could even have inadvertently started the trend for these large cupboards for putting your TV and Hi-Fi in – if you remember those!

Ever since then I have been building and upgrading systems for myself, my immediate family, extended (and extending) family, and ever-extending circle of friends (some of which only ever call when they have a PC problem! – You know who you are!). For 10 years prior to going it alone, I (amongst other duties) carried out the PC maintenance for a software house with up to 40 employees, all using PC’s for different purposes with different requirements.